Home>Blog > The of History of Dental Implants

The of History of Dental Implants 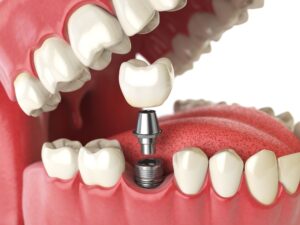 The history of dentistry is a history of innovation. It’s also a testament to how much people care about the health and appearance of their smiles. There are thousands of years of advancement to consider, even more seemingly modern dental care innovations like dental implants.

The team at our Jackson dental care center would like to look at the history of dental implants, which goes back much further than you think.

Some of the earliest attempts at dental implants date back to the ancient world. These tooth replacement attempts show an attempt to fill the spaces left behind by missing teeth, in people both living and dead.

Innovations in the 18th and 19th Centuries

Major innovations in implants dentistry occurred in the 1700s and 1800s. Dentists and doctors began to experiment with gold and other metal alloys to help support false teeth. These early attempts were ineffective since the body often rejected these early implants. It would take time before a proper alloy for implants could be identified.

In the 1930s and 1940s, doctors of these eras began to use orthopedic screws to fix false teeth in place. A special spiral post design was used to encourage bone to grow around these early implants.

1952: The Discoveries of Dr. Per-Ingvar Branemark

In 1952, Dr. Per-Ingvar Branemark was studying the blood flow in rabbits. During this study, he found that the bones of the rabbits had fused to titanium chambers he’d placed as part of his research.

Through serendipity, Dr. Branemark had discovered osseointegration, the process by which an implant fuses with the existing bone structure. Finally, here was an allow that would not be rejected by the body and could fuse with bone for proper anchoring and stability.

After additional years of research, Dr. Branemark placed the first successful two-stage titanium dental implant in a live patient. This implant took six months to properly integrate with the bone tissue, and lasted for an astonishing 40 years.

The modern dental implant we know today was, in effect, born.

Innovations in Second Half of the 20th Century

Further innovations in implants dentistry have occurred in the decades since Dr. Branemark’s discovery. New implant shapes have been used to ensure proper stability of the implant when in place. In addition, new oral surgery techniques have been developed in order to improve patient recovery and increase the stability of dental implants when they are in place.

To learn more about dental implants and your other options for treating tooth loss and missing teeth, be sure to contact our advanced dental care practice today. The team at Harmony Dental Care looks forward to your visit and discussing these matters in much greater detail.

We encourage you to complete the Patient Information Forms and bring to your appointment or fax them to 601-713-1393.

All dentistry is performed by a Mississippi licensed General Dentist.